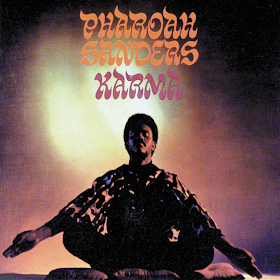 "'Trane was the Father...Pharoah was the son...I am the Holy Ghost."

Part 2 of 3. On Karma, the Son rides over a meditative, two-chord modal groove. Pharoah uses a smooth tone early on but doesn't shy away from abrasive squeaks and pitch-bending. I feel that he really bares his soul each time he plays the head of "The Creator Has A Master Plan". He's got the kind of powerful tone that really grabs you by the balls. It's such commanding playing. Just when you think you've reached some kind of zen about fifteen minutes in, shit starts to get crazy. A few minutes later Pharoah's primal wails are matching Leon Thomas' abstract yodeling. Heavy percussion and noise freak out. Just awesome. You might recognize some of the names on this recording from Coltrane's Africa/Brass sessions.

1. The Creator Has A Master Plan
2. Colors